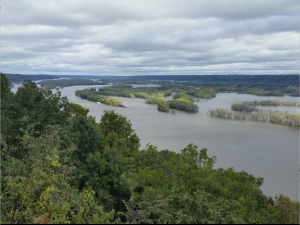 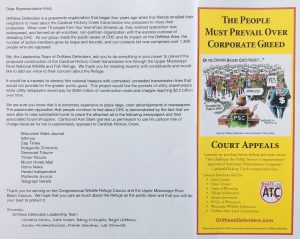 *******************
Howard Learner and the staff at Environmental Law and Policy Center have been hard at work.  Here is their Reply Brief, filed with Dane County Circuit Court on July 10 by attorneys Brad Klein, Howard Learner, Rachel Granneman, and Ann Jaworski.
Reply Brief ELPC 7.10.20pdf
This state appeal questions the merits of the PSC decision. (The federal appeal questions the non-recusal of two PSC commissioners.)  Opening Briefs were submitted on May 1, Response Briefs on June 15, and lastly this Reply Brief on July 10.  Since Judge Niess has retired, Judge Jacob Frost will issue the decision, based on the briefs and, probably, oral argument.  Frost is an Evers appointee and the only information I have is from this 6/8/20 Wisconsin State Journal article.

On behalf of everyone at Driftless Defenders, we send our sincere thanks and gratitude to Environmental Law and Policy Center.
*********************
As you know the Iowa County Board voted to file a lawsuit challenging the PSC’s decision to approve the CHC transmission line.  Their attorney has filed the first brief and is working on the next.  Some county supervisors have suggested that the County Board should review their decision and then confirm or deny whether to continue with the lawsuit.  If Iowa County were to drop out of the appeal it could have serious consequences.  We need to be proactive to ensure this does not happen!  Please contact your supervisor and virtually attend the County Board Meeting on Tuesday, June 16 at 7 p.m.

The follow letter was sent individually to each Iowa County Board Supervisor by the leadership team of Driftless Defenders.

Dear Iowa County Board Supervisor _______,
It has come to our attention that Tuesday’s Executive Committee meeting included discussion of whether to continue with the County’s lawsuit appealing the decision made by the Public Service Commission (PSC) to approve the Cardinal-Hickory Creek transmission line project proposed by American Transmission Company (ATC) and partners.  We urge you to continue!
As you know by the appearance of large numbers of people at your meetings, for four years there has been strong and persistent grassroots opposition to this project.  A record number of almost 1,000 people attended the three-day PSC Public Hearings last June, and 500 of them assembled at Dodger Bowl — even though there was inadequate parking and a storm with torrential downpour.
We were pleased when you responded to your constituents by first passing a resolution opposing the transmission line and subsequently voting to file a lawsuit.
Your constituents remain fervently opposed to the transmission lines.  Our only hope is for justice to prevail with this lawsuit, and county involvement is an important component.  Please continue to support us and remain true to the good decision you made when you voted 14 to 2 with one abstention to file an appeal.  Thank you.
Sincerely,
Driftless Defenders Leadership Team
Michelle Citron
Kate Cooper
Betsy D’Angelo
Boyd Gibbons
Susan Michmerhuizen
Frank Sandner
Lea Stroncek
****************
Things are moving along with our State appeal of the merits of the PSC’s decision regarding CHC. Opening Briefs were filed on May 1st in Dane County Circuit Court by the following parties:
*  Driftless Area Land Conservancy (DALC) and Wisconsin Wildlife Federation (WWF)
*  Iowa County
*  Dane County
*  SOUL
*  Klopp
*  Belken
Below are links to the briefs.
Filing of these briefs is a result of details worked out in the preliminary hearings.  The judge would normally have decided the appeal case by reviewing the record, based solely upon documents that were part of the Public Service Commission’s proceedings (i.e., what they decided to include). Because our side’s arguments were persuasive in pointing out that important information had been left out, Judge Niess ruled to allow additional information.  Among the added documents are the inclusion of Environmental Law and Policy Center’s criticism of the flawed Decision Matrix.
Next steps of the process:
June 15 – Response briefs from other side
July 10  – Reply briefs from our side
No date –  Judge Niess will make the decision; there will be no jury.  The time line is at his discretion.
There is a federal appeals case which is based on the refusal of Commissioners Valcq and Huebsch to recuse themselves from the CHC decision.  Proceedings are ongoing but we have no information to report.
Stay Safe, everyone, and Be Well!

Initial Brief of Iowa County, The Village of Montfort and The Town of Wyoming for Dane County-184

A hearing was held on January 21, 2020 before Judge Richard Niess at Dane County Circuit Court in Madison to work our organizational procedures for the appeal challenging the PSC’s approval of the Cardinal-Hickory Creek transmission line.  After agreement from attorneys for both sides, the Judge granted an Order for Consolidation and an Order for Intervention.  He granted the Public Service Commission an extension to February 11 to file initial papers.  Lawyers for both sides agreed to work together to determine further submission deadlines.  After that the appeals process will begin.

On Wednesday, December 11, the Environmental Law & Policy Center filed a lawsuit in the the U.S. District Court for the Western District of Wisconsin on behalf of Driftless Area Land Conservancy and Wisconsin Wildlife Federation challenging the refusal of two commissioners to recuse themselves in the Cardinal-Hickory Creek high-voltage transmission line case and the PSC’s subsequent approval of the line.

The following is information from the Driftless Area Land Conservancy

You will be contacted by the developers.  How you respond will affect the disposition of your land now and on into the future.

Strongly Suggested:  Don’t sign anything until you’ve consulted an attorney and/or land appraiser.

Rights-of-Ways and Easements for Electrical Facility Construction in Wisconsin

This document (click on the link above for full text) contains more information about what an easement is and your rights. The document is not short, but it does have a table of contents that you can use to help navigate. Here are a few highlights:

Here are comments on the Final Environmental Impact Statement for the proposed Cardinal-Hickory Creek transmission line, submitted by Environmental Law and Policy Center on behalf of the Driftless Area Land Conservancy and the Wisconsin Wildlife Federation.

Thanks to everyone who took the time to contributed to the FEIS!

And thanks to everyone who worked to make this happen.

The link below will take you to a map of the final CHC route (in blue).  “+” allows you to zoom in to see the exact route in detail.

Much to our dismay, on Thursday, September 26th, all three Public Service commissioners gave their final approval to Cardinal-Hickory Creek.  Realistically speaking, we knew a vote to deny was unlikely.  Given the unprecedented and convincing opposition, however, we had hoped for a split vote.

Next Step:  An Appeal

This setback does not mean our fight has ended.  Driftless Area Land Conservancy (DALC), together with Wisconsin Wildlife Federation, will appeal the decision.  They will be represented by attorney Howard Learner, Executive Director of Environmental Law and Policy Center.  He and his staff represented them during the PSC proceedings and will continue to do so throughout the appeal process.  All of their work has been, and will continue to be,  pro bono.  We are sincerely grateful.

To familiarize yourself with Howard Learner, watch this interview on Wisconsin Public Television’s “Here and Now.”  Watch Here

Since Driftless Defenders began three years ago we have been fortunate to have had a close working relationship with Driftless Area Land Conservancy.  We also benefitted from their relationship with Environmental Law and Policy Center.  As a new grassroots organization we would not have been as effective in this fight without their combined guidance.

It is essential that we continue to support them as the appeal process moves forward.  Despite the  pro bono work of ELPC, DALC needs to complete payment of significant expenses for the expert witnesses who gave testimony before the PSC.  Going forward there will be added expenses for the appeal process.  If you are able, please help us stop CHC and acknowledge DALC’s contribution to the cause by making a tax-deductible donation to cover their legal expenses.

Details about the PSC Commissioners’ Approval:

More than 100 people attended the PSC Open Session, spilling out of the hearing room into an overflow room with video.  Our understanding was that the commissioners would be having a discussion of a “Decision Matrix,” created by their staff. The meeting began with a short introduction during which the public was praised for their overwhelming input and knowledge about CHC.  The record number of intervenors were also thanked.  Next, with no discussion of the Matrix, all three commissioners announced their approval of CHC.  People were stunned!  Many walked out and gathered in the lobby in a state of confusion, where reporters interviewed some of them.

Many attendees remained for four hours to hear the commissioners discuss the Decision Matrix. It defined 33 issues and under each listed opinions and testimonies of all parties.  They were upset to realize the commissioners disregarded the testimony by expert witnesses and public intervenors, the bipartisan opposition of legislators and municipalities, and the overwhelming public opinion, along with ignoring their own staff’s recommendations.  They abandoned any provisions and protections that would have mitigated the hardship this construction will bring to natural habitats and protected areas, landowner easements, and other reparations.

For a very good report, please listen to Wisconsin Public Radio Morning Show, “Cardinal-Hickory Creek Transmission Line Approved.”  Chris Hubbuch of the Wisconsin State Journal gives an accurate account of the reaction of the crowd and includes a description of the impressive volunteer work that has been done by the opposition. Read More

You can also read Chris Hubbuch’s report in the Wisconsin State Journal, “Regulators approve controversial Cardinal-Hickory Creek power line,” which provides many quotes from both sides of the issue. Read More

Immediately after the decision was announced Democrat legislators Pope, Hesselbein, Considine, and Erpenbach issued a press release stating they were disappointed and surprised by the approval, given the extent of opposition.

Equally distressing was the timing of two news items the Friday before the Tuesday PSC meeting.  With PSC Commission Chair Rebecca Valcq present, Governor Tony Evers once again announced his executive order for Wisconsin to be carbon free by 2050. Read More

Just one hour later RENEW and Clean Grid Alliance held a press conference at the Capitol stating that the only way Evers’ clean energy goals could be met was by building CHC.   Read More

The following Tuesday all three commissioners gave as one of their reasons for approval that Cardinal-Hickory Creek was needed in order to achieve the goal of clean energy. Driftless Defenders, other opposition groups, and expert witnesses believe we do not need transmission lines to meet this important goal.  The better way to make us carbon free is by using local clean energy alternatives and modern storage technology, rather than building a destructive, unnecessary, outmoded line that will carry a significant amount of fossil fuel generated electricity.

We urge you to make your opinion known to Governor Evers

We Are Not Giving Up

While the PSC decision was very discouraging, it has been heartening to see that people are still engaged.  Members of Driftless Defenders and other opposition groups are making suggestions for how to proceed and offering their help.  Our  Leadership Team, in coordination with other opposition groups, is discussing ways to channel this energy.  If you have comments or ideas to share, please contact us info@driftlessdefenders.com

We hope you will continue to support Driftless Defenders in this fight to defeat Cardinal-Hickory Creek.

As Howard Learner reminds us, “We’re in this to win!  And we’re only in the third inning.”

Thanks to everyone who attended the PSC Public Hearings.  Attendance was excellent!  Almost 1,000 attendees at all sessions, and approximately 130 speakers.  Administrative Law Judge Newmark described the hearings as an “amazing experience.”  He said the testimonies were well-thought out, intelligent, and passionate, and they will definitely benefit the record. 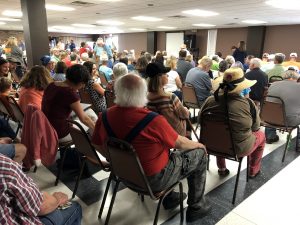 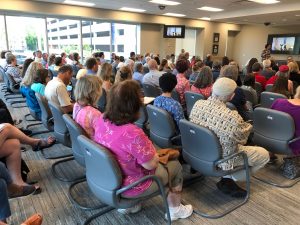 Here are simulations of what the CHC will look like if it is built. 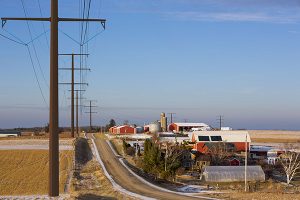 Simulation of towers in residential area in Mt. Horeb