We’ve been busy this summer!

This was the fourth year we participated in the Mineral Point Fourth of July parade.  Once again we received cheers from the crowd.  Our flyer was updated with PSC proceedings and included information for people to submit comments to the PSC by July 7, 2019. 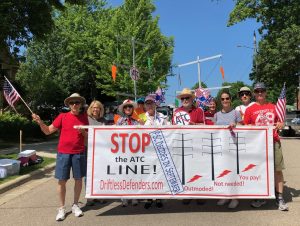 On July 14 we returned for our fourth year participating in the Farmers Appreciation Day parade in Dodgeville.  A new banner announced that 500 people attended the Public Hearings in Dodgeville and thanked them for their participation.  Among the sidewalk we received thumbs up and thank you’s.

Our newest and largest-ever billboard went up in July on 18/151 in Ridgeway.  It’s the second imploring Governor Evers to get involved.  Please send a picture of the billboard along with a letter to: Governor Tony Evers, 115 East, State Capital, Madison, WI 53702.
Or email: Eversinfo@wisconsin.gov

You can download the image by right clicking on it and them “copy image.” 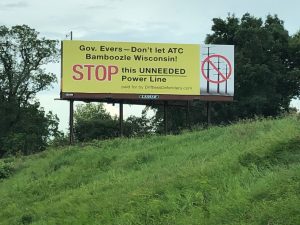 There was an error obtaining the Benchmark signup form.